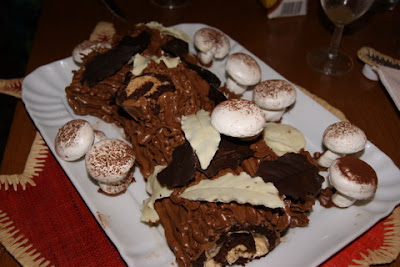 I finally post about this 'work of art' that Anita and I made for New Year's Eve.
The recipe is from The Cake Book by Tish Boyle and it was a fantastic recipe for me.
Anita loved making the chocolate leaves; we used rose's, ivy's, laurel's and kumquat's leaves as a base but I confess I didn't temper the chocolate. The mushrooms were really much fun to make as well and everybody was very interested in the process of making both. 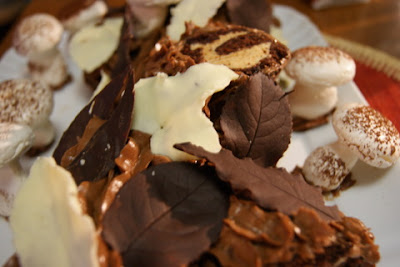 The cake itself it's a chocolate chiffon cake filled and frosted with an hazelnut and chocolate buttercreams.
I didn't know where to get praline paste so I made it myself following this link  .
Please visit the Cake Slice Blogroll to see more Bouches de Noel ! 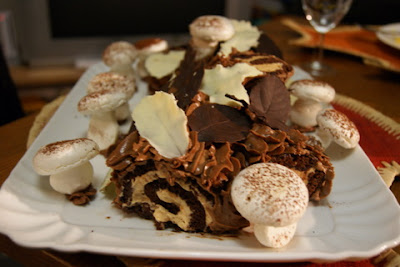 
Chocolate Chiffon Cake
Heat the oven to 180C. Grease and line the base and sides of a 11½ x 17½ inch swiss roll tin with greaseproof paper. In a large bowl whisk the egg whites and cream to tartar together until foamy. Weigh out half the caster sugar and slowly add to the egg whites, whisking constantly until thick and glossy. Set aside. In a clean bowl, whisk the whole eggs, oil and vanilla together until combined. Scatter the remaining half of the sugar over the top, along with the flour, cocoa powder and baking powder. Mix until just blended into a thick batter. Take one third of the meringue mix and fold it through the chocolate mixture using a spatula to slacken it. Add the rest of the meringue and fold in gently until just mixed in. Pour the chocolate mix into the prepared tin and spread it out into an even layer. It will be quite thin. Bake in the oven for 12-15 minutes until slightly puffed and springy to the touch. Lay another piece of greaseproof paper over a cooling rack and lightly dust with caster sugar. Flip the cake layer out onto the sugar dusted paper and carefully peel off the parchment attached to the cake. Leave to cool before brushing with syrup and filling. Syrup In a small saucepan combine the water and sugar and heat, stirring constantly, until the sugar has dissolved. Stop stirring and increase the heat to a rolling boil. Remove from the heat and allow to cool for 10 minutes before stirring in the liqueur.
Chocolate Hazelnut Buttercream
Place a large heatproof bowl over a pan of simmering water. In the bowl, whisk together the sugar, egg whites and water. Keep whisking until the mixture reached 160F on a sugar thermometer, it should turn white and glossy. Then remove from the heat and whisk with an electric mixer until the meringue thickens, becomes stiff and cool, about 5 minutes. Reduce the speed of the mixer and gradually beat in the butter, small chunks at a time, until incorporated. Then beat in the vanilla. Melt the chocolate and stir it through the half the buttercream, and fold hazelnut paste through the remaining half. (We can’t easily get nut pastes in the UK so I simply doubled the amount of chocolate and used that for everything) Assembly
Lay the cooled cake, still on the paper, on a clean flat surface and spread with the hazelnut buttercream nearly to the edge of the cake. Starting at the long edge, fold over a thin strip of the sponge to start off your roll. Then confidently roll up the rest of the sponge to form a log. Use the paper underneath to help you lift and roll the cake. Trim off one end of the cake at a diagonal and place it on top of the cake to create a ‘stump.’ You can cut off another smaller piece to attach to the side too if you wish. Transfer the cake to a large serving plate and use the chocolate buttercream to cover the cake. Decorate with leaves, meringue mushrooms or however you choose. Place in the fridge to chill for half an hour before serving.
Posted by natalia at 4:37 PM 14 comments: 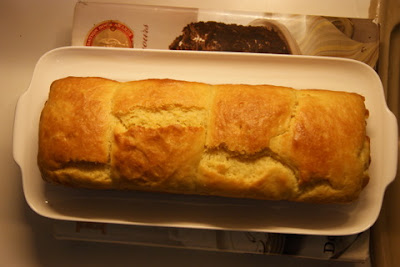 I'm enjoying these holidays to bake some recipes I haven't tried from Baking from my home to yours and the ones I really wanted to try are the yeast ones.
As Dorie herself suggests when making the Golden Loaf I used half the dough to prepare the Raisins  Snails, I had some lemon curd I had prepared few days ago so I substituted it for the pastry cream and omitted the cinnamon : these snails are so good I have to find someone to give them to !
Please visit the TWD site for some nostalgic posts.