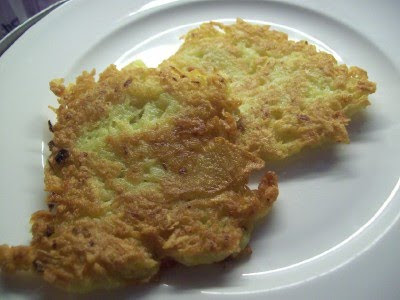 As an Italian, I have very mixed origins : my last name, Maovaz, always requires some spelling, as my mother's (Delcroix).
My Grandfather was born in what was then the Austro-Ungarian Empire, has become Jugoslavia and now is Croatia, on my mother's side her grandparents came from Belgium.
My nonno Maovaz was Buddist but none of my ancestors was Jewish that I know of.
In Rome there is a big Jewish Community, actually is the oldest in Europe, dating back to the II century B.C. and, as you can imagine Roman Jews eat pasta and not Latkes !
I'm very interested in the Jewish world as in the Jewish Cuisine, but, I must admit, these fritters are so good my children deveaured them without much interest in their origins !
The recipe calls for rutabaga and beets as well but I have never seen a rutabaga in my life and beets are no longer around.
Please visit Natashya to see what wonders she came up to !
RECIPE
(from Moosewood Restaurant Celebrates)
3 cups peeled and grated Russet Potatoes
1/2 cup grated onions
2 eggs lightly beaten
1/4 cup flour
1/2 teaspoon Baking Powder
1 teaspoon salt
1/4 teaspon ground black pepper
1/2 cup peeled and grated rutabaga (I skipped this)
1/2 cup peeled and grated beets (I skipped this too)
1/2 cup chopped parsley (no green things wanted)
2 Tablespoons fresh dill (same as above)
1/4 cup vegetable oil
Line a colander with paper towels. Place the grated potatoes and onions in the lined colander and vigorously press out as much liquid as you can, until the grated potatoes are somewhat dry. This will help create crisp latkes.
Transfer the grated potatoes and onions to a large bowl and stir in the eggs, flour, baking powder, salt and pepper. Divide the mixture among three smaller bowls . Mix the rutabaga into the first bowl, the beets into the second and parsley and dill into the third.
Preheat the oven to 200°.
Warm the oil on high heat in a large cast iron skillet until a drop of batter sizzles. Drop the batter into the skillet and fry until both sides are crisp.
Posted by natalia at 9:14 PM 4 comments: