This month our host is The Bread Experience and she chose this very nice and appropriate theme. 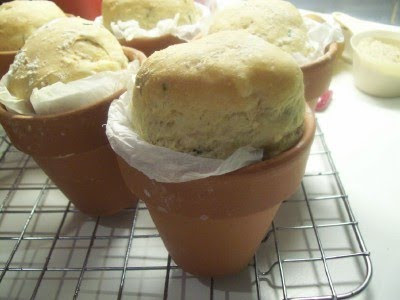 Few days later I found this great recipe in The Return of the Naked Chef by Jamie Oliver
and it was already baked in a pot ! 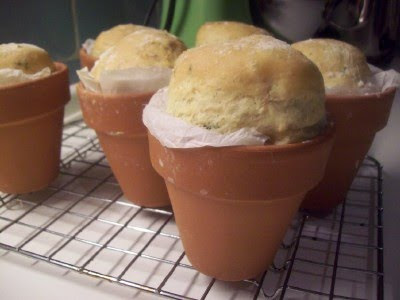 This is the original recipe I halved it and used only 1 sachet of yeast, didn't use the sugar and salt and used only feta (today is Labor Day and every store is closed )

1 handful of basil, torn up.

Firstly, prepare all your ingredients so they are ready to add to the flour: grate and crumble all your cheese and tear up your prosciutto and basil.

Then, dissolve the yeast and honey in half the tepid water.

In a very large bowl (or on a clean surface) make a pile of the flour, salt, cheese, prosciutto, and basil. Make a well in the centre and pour in all the dissolved yeast mixture. With four fingers of one hand, make circular movements from the centre outwards, slowing bringing in more and more of the flour until all the yeast mixture is soaked up. Then pour in the other half of the tepid water and the egg yolks into the centre and gradually incorporate all the flour to make a moist dough. (Certain flours may need a little more flour, so adjust until you have the right consistency).

Then comes the kneading! This is fun, but it don’t half get tiring. However you mustn’t stop! Roll, push and fold the dough over and over for at least 5 minutes. This develops the gluten and structure of the dough. If the dough sticks to your hands (which it will), just rub them together with a little extra flour.

Flour your hands well, and lightly flour the top of the dough. Make it into a roundish shape and place on a baking tray. Deeply score a cross into the dough with a knife – this will allow it to relax and prove with ease. Leave it to prove in a warm, moist, draught-free place until it’s doubled in size. If you want to speed things up then cover it with cling-film. This will take around 40 minutes or so.

When the dough has doubled in size you need to knock the air out of it by bashing it around for a minute. Now you can shape it into whatever shape is required. I divided my dogh in 12 rolls and put six of them in the pots (9 cm diameter) I rolled the rest in buns. Proof until doubled in size. 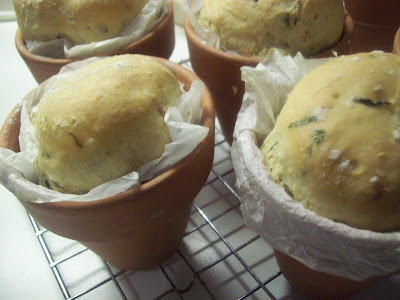 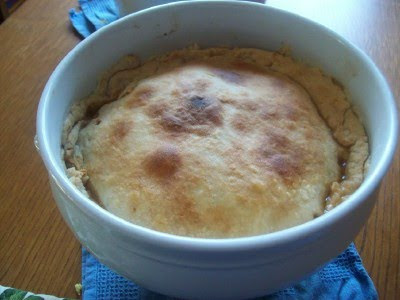 I'm sorry I'm posting so extra late but it took me more than a while to dare to use SUET !!!
Then I wondered where to get it . Finally I went to a big butcher's store and when I asked for it he looked puzzled and then got it out of the garbage... !
I finally had it ! 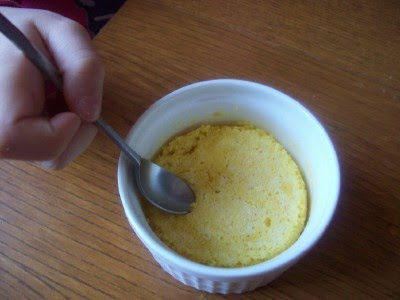 As for the recipes I remembered that Nigel Slater in Appetite had a few recipes I liked and one of them used mincemeat that I had prepared long ago and stored in my freezer. The mincemeat was a vegetarian one but suet would be in the crust. 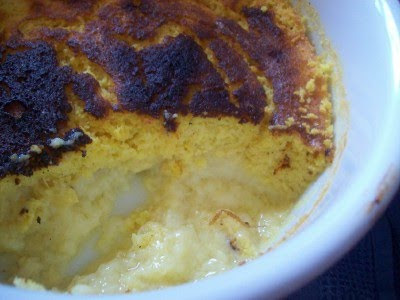 Once I decided to make them I wanted to try both puddings: the crust one and the sponge one I must say I loved both the sponge one was made with butter though . The crust made with suet is very very good so next thing is to try it savoury ! (I posted Nigel Slater's recipes at the end of the post) 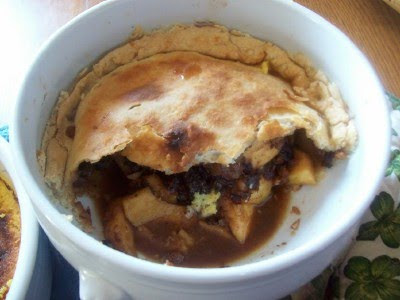 Pudding Crust for both Savoury Pudding or Sweet Pudding (using suet or a suet substitute):

(250 grams/12 ounces) Self-raising flour (Note* If you cannot find self-raising flour, use a combination of all-purpose flour and baking powder.)
(175 grams/6 ounces) Shredded suet or suet substitute (i.e., Vegetable Suet, Crisco, Lard)
(a pinch) Salt and pepper (Note* If making a savory dish, can be replaced with spices for sweet if wished.)
(210 millilitres/a little less than a cup) Water (Note* You can use a milk or a water and milk mix for a richer pastry.)

1. Mix the flour and suet together.
2. Season the flour and suet mixture with salt and pepper if savory and just a bit of salt and/or spices if sweet.
3. Add the water, a tablespoonful at a time, as you mix the ingredients together. Make up the pastry to firm an elastic dough that leaves the bowl clean. The liquid amounts are only an estimate and most recipes just say water to mix.

4. Don’t over handle the pastry or it will be too hard.
5. Reserve a quarter for the lid and roll out the rest and line a well-greased bowl.
6. At this point add your filling.. a couple of options are give below but have fun and go wild!
7. Roll the final piece of pastry out into a circle big enough to cover the top of the basin, dampen the edges and put in position on the pudding, pinching the edges together to seal.
8. Seal well and cover with a double sheet of foil – pleated in the centre to allow room for expansion while cooking. Secure with string, and place it in a steamer over boiling water.
9. Steam for up to 5 hours, you may need to add more boiling water halfway through or possibly more often. There is a lot of leeway in this steaming time and different recipes give different steaming times. Delia Smith says 5 hours for Steak and kidney where as Mrs Beeton says 2.5 for a similar dish! One way to tell that it is cooked is when the pastry changes colour and goes from white to a sort of light golden brown. It is also hard to over steam a pudding so you can leave it bubbling away until you are ready.

This one is a steak and onion one cooked for 1.5 hours.

This sort of pastry can also be used as a topping for a baked meat pie and becomes quite a light crusty pastry when baked.

1. Chop the steak and kidney into fairly small cubes, toss them in seasoned flour, then add them to the pastry lined basin.
2. Pop the onion slices in here and there.
3. Add enough cold water to reach almost to the top of the meat and sprinkle in a few drops of Worcestershire sauce and season with salt and pepper.
4. Follow the rest of the instructions in the crust recipe to finish pudding.
5. Cook for at least 2.5 hours (Mrs Beeton) up to 5 hours (Delia Smith).

1. Cut the butter into small pieces and put half in the basin with half the sugar.
2. Prick the whole lemon (preferably one with a thin skin) all over, using a thick skewer.
3. Place on top of the butter and sugar in the basin.
4. Cover with the rest of the butter and sugar.
5. Finish building the pudding as per the pastry recipe.
6. Steam for 3 ½ hours, or longer (for a really tender lemon), adding more water if needed.
7. To serve, turn the pudding into a dish with a deep rim, when you slice into it the rich lemon sauce will gush out.
8. Make sure each person is served some of the suet crust, lemon and tangy luscious sauce.

1. Sift flour, salt and baking powder into bowl.
2. Add breadcrumbs, sugar and suet.
3. Mix to a soft batter with beaten egg and milk
4. Turn into a buttered 1 litre/ 2pint pudding basin and cover securely with buttered greaseproof paper or aluminum foil.
5. Steam steadily for 2.5 to 3 hours
6. Turn out onto warm plate, Serve with sweet sauce to taste such as custard, caramel or a sweetened fruit sauce.

Variants:
Spotted Dick - Add 75g/ 3oz currants and 25g/1 oz of mixed chopped peel with the sugar.
Syrup or Treacle or Marmalade Pudding – put 2 Tablespoons of golden syrup, treacle or marmalade at the bottom of the bowl before adding pudding mix.
My Fair Lady Pudding – Add finely grated rind of 1 medium orange or lemon with the sugar.
Ginger Pudding – replace the sugar with 100g/4oz of treacle, and add 1/2 tsp ground ginger.

Here are Nigel Slater's:
Crust Pudding :
200 gr self raising flour
100 gr suet
water about 6 TBS (I used less)
apples 1 kg peeled, cored and cut in thick slices
juice of one lemon
mincemeat about 8 TBS
Pastry
work the flour with the suet and add just enough water so that it comes together.
rool the dough in a thick sausage and cut it in thin slices and press the in the buttered pudding basin s that it is covered leaving enough doug to roll for a lid.
Filling
cut the apples and mix with the lemon juice, add the mincemeat anf fill the prepared basin.
top it with the pastry lid.
Cover the pudding basin with greaseproof paper with a pleat cover it with foil and place it in a pan of boiling water filled so that the water comes to about a third of the basin . Steam for a good two hours (for me they were more and in the end I broiled the top that lookes too ugly!).
A sponge Pudding and his own Sauce.
100 gr butter
175 gr sugar
1 lemon
2 oranges
4 eggs
40 gr flour
400 ml milk
Grate all the rinds and flavour the sugar with them cream the butter and sugar until pale and fluffy.
Preheat the oven to 350°.
Separete the eggs and add the yolks to the butter mixture. Add the fluor and the milk followed by the juices of lemon and oranges.
Beat the egg whites until firm and add to the rest .
Fill a soufflè dish half way and put it in a rosting tin filled with hot water so that it reaches half of the soufflè dish. Bake for an hour or so until the top of the cake is springy.
As for the crust cake I used the broiler (too much !!).