In occasion of Bread with Nuts for BBD's 3rd anniversary hosted by 1x umrühren bitte aka kochtopf I baked a Spanish Bread with Pistachio Nuts and Saffran. 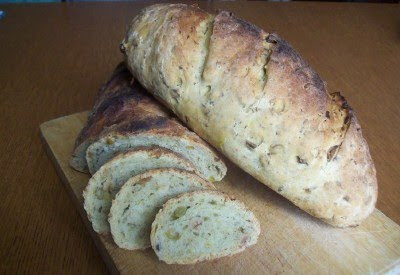 I loved this bread, the saffran doesn't show much maybe because I used the threads (?) and not the powder.
Recipe
(from il Libro del Pane by Alessandra Meldolesi)
700 gr all purpose flour
150 gr shelled Pistachios Nuts
1 envelope Saffron
25 gr fresh yeast
1 pinch of sugar
Extra Virgin Olive Oil
14 gr salt
Dissolve the yeast in 1 dl water adding some water.
Mix flour, coarsely ground pistachios, yeast, 2,5 dl water, saffron and 2 TBS extra virgin olive oil, start kneading and after a while add the salt. Knead for about fifteen minutes. Let it rise until doubled. Shape, and proof for about three quarters of an hour. Meanwhile turn the oven on to 200° C . Add some steam and bake your bread for about 45 minutes if you made 2 loafes.
Posted by natalia at 6:39 PM 9 comments: 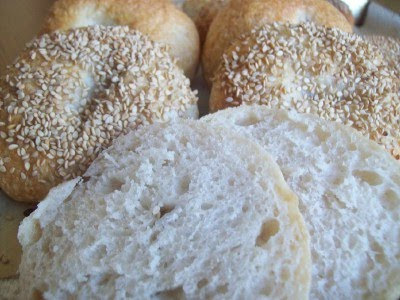 I found the Artisan Bread Bakers group on Facebook thanks to Natashya of Living in the Kitchen with Puppies, who is really making wonders on her blog.
This group chooses to make a different bread each month and this time it was bagels that are a favorite of mine so I couldn't help but join and here are mine ! 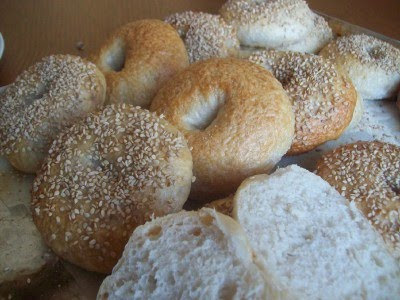 Bagels
Adapted from Peter Reinhart’s The Bread Baker’s Apprentice by blossomtostem.net; further adapted by your host.

A day (or two) before you want the bagels (see below for instructions on making the bagels in one day):

In a large bowl (if using a stand mixer, go ahead and start it in that bowl) mix 1/2 teaspoon yeast, 2 cups high-gluten flour, and 1 1/4 cups water until it forms a thick batter. This is a very stiff dough, so hand mixing and kneading is recommended. Cover with plastic wrap and let sit until bubbly, nearly doubled in size, and on the verge of collapse, about 2 hours.

Add 1/4 teaspoon instant yeast to the sponge and stir. Add the salt, malt syrup or powder, and 1 1/2 cups flour. If using a stand mixer, mix on low speed for about 2 minutes, or by hand for a few minutes or until a dough ball has formed. Slowly add the remaining flour, and mix on medium speed for 6 minutes (or knead by hand for about 10 minutes) or until all of the flour is incorporated. The dough should be smooth, stiff, stretchy, and not sticky or tacky. If the dough feels dry and tears easily when stretched, add a little water, a teaspoon at a time, and knead some more. If the dough feels sticky, add some flour.

Divide and Shape the bagels.

If you want to bake the bagels on the same day, after shaping them, let them rest covered for 30 minutes, then proceed with boiling and baking.

On the day you want the bagels (one or two days later):

Preheat the oven to 500°F. Line a baking sheet with parchment paper and mist with oil and dust with cornmeal. Bring a large pot of water to a boil, and add the baking soda. Have a slotted spoon ready. If you are topping with seeds or salt, have those out and ready.

Remove the bagels from the refrigerator. Place a few bagels into the boiling water. Be careful not to overcrowd the pot–the bagels will puff up a bit in the water. Boil for 1 minute, then turn the bagels over and boil for another minute. Place on prepared parchment. If using seeds or salt, top when the bagels come out of the water. Repeat with the rest of the bagels. 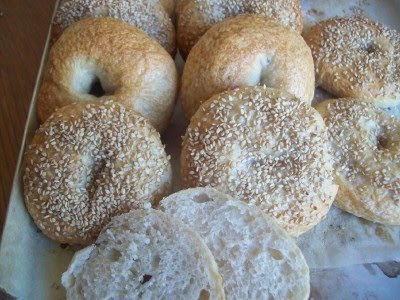 In Memory of Rosie

Today it’s been forty days without Dear Jules, aka Rosie of Baking Cakes Galore, who left us quite unexpectedly of heart attack. This event was created to honour Jules but also to bring awareness about heart diseases and the best cure is to know what causes it and how to prevent it.

As much as I hate repeating myself, I am going to tell you not only to look after your own health, but since WE are responsible for putting food on the plate to feed our families we should think twice of what to eat and what not to eat.

According to Mayo Clinic, heart disease may be the leading cause of death for both men and women, but that doesn’t mean you have to accept it as your fate. Although you lack the power to change some risk factors — such as family history or age — there are some key heart disease prevention steps you can take. 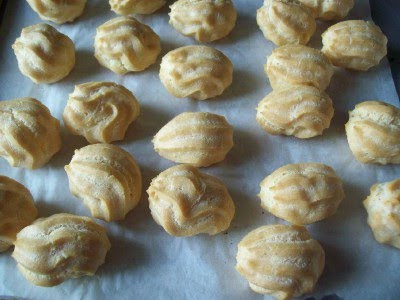 What Is Coronary Artery Disease?

Coronary artery disease (CAD), also called coronary heart disease, is a condition in which plaque (plak) builds up inside the coronary arteries. These arteries supply your heart muscle with oxygen-rich blood.

Plaque is made up of fat, cholesterol (ko-LES-ter-ol), calcium, and other substances found in the blood. When plaque builds up in the arteries, the condition is calledatherosclerosis (ATH-er-o-skler-O-sis).

What Causes a Heart Attack?

Most heart attacks occur as a result of coronary artery disease (CAD). CAD is the buildup over time of a material called plaque on the inner walls of the coronary arteries. Eventually, a section of plaque can break open, causing a blood clot to form at the site. A heart attack occurs if the clot becomes large enough to cut off most or all of the blood flow through the artery.

This is the what Ivy wrote when she organized this event in honor of Rosie Actually it's thanks to Rosie if I met Ivy because I joined the Sweet and Simple Bakes group that Rosie had created with Maria and between all the bakers I met Ivy.

I never met Rosie but I feel that I did, only from the contacts we had thanks to internet.She was so kind and nice to everybody that I was very sorry to hear she was unwell and I couldn't even imagine it could be true she was not with us any longer. 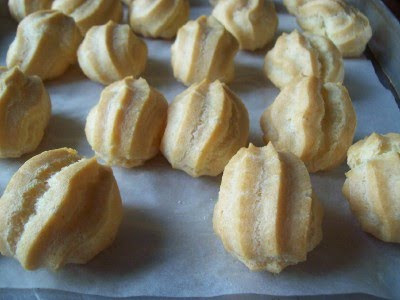 I decided to make healthier puffs to make my previous Profiteroles lighter.

I got the recipe from Luca Montersino a very health-conscious Pastry Chef. 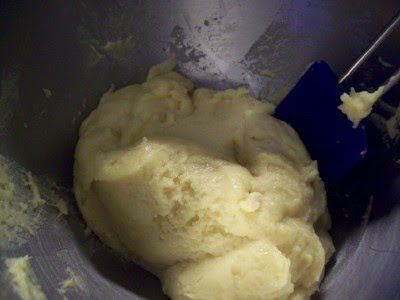 Add 160 gr all purpose flour all together

Put the dough in a mixer and add 70 gr egg whites followed by 390 gr of whole eggs.

Form the puffs, either with a spoon or with a sac a poche and cook in a 220° oven until golden.

I noticed the puffs tend to dry sooner than the ones made with butter so fill right away or freeze in an airtight bag. 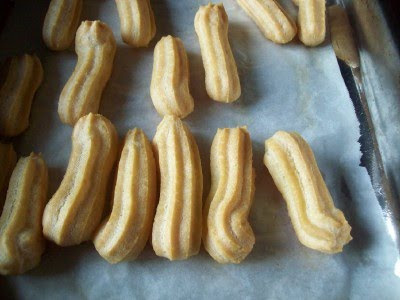 Email ThisBlogThis!Share to TwitterShare to FacebookShare to Pinterest
Labels: puffs 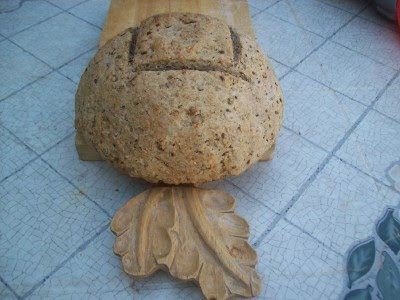 Now ...Finally the Babes decided fixed rules for the buddies and I (who baked this wonderful hearty anf gigantic bread on the 17th of June) waited until too late !
I'm sorry.
I loved the bread, the way it taught me to use soy beans in breads, its crunch, and I even owned the book !!!
Thank you Lien !!! 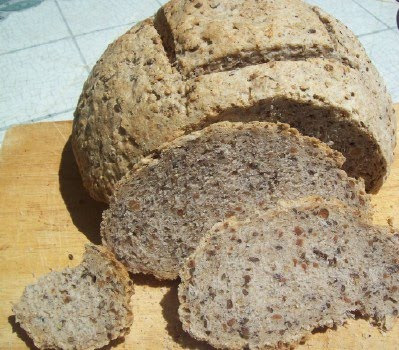 Prepare the soy beans:
Place them in a small bowl, cover them with the boiling water, and let them soak for 10 minutes. Drain the beans and let them cool. Process the beans in a food processor fitted with the metal blade until they roughly chopped.

Place the beans on a cookie sheet and roast them in a preheated 350°F oven between 15 and 20 minutes, until they are completely dried out. Set them aside.

(to make your own, grind a few tablespoons of whole caraway seed in a mortar with a pestle until you have a fine powder. If your powder still contains large chunks of seed, sift the mixture and use 1 tablespoon of the sifted powder)

Prepare the sponge/poolish:
First proof the yeast, in a large bowl, in 1 cup of the warm water. When it is creamy, mix in 1 1/4 cups warm water and slowly add the rye flour, whole wheat flour, and 1½ cups of white flour by handfuls while stirring the mixture with a wooden spoon.
Set the batter aside, in a large bowl, covered with a dish towel, for between 8 and 10 hours or overnight.

Make the dough:
Proof the yeast in the warm water, add it to the risen sponge, and mix the two together. Start adding the flour, handful by handful, stirring vigorously with a wooden spoon. After all but 1 cup of the flour has been added (this will take about 10 minutes), turn the dough out onto your worktable, sprinkle the salt and the ground caraway over the dough, and incorporate them by kneading the dough for about 5 minutes while adding the last of the flour. The dough should be very moist.

Add the flax seeds, millet, and roasted soy beans and knead the dough to incorporate them.
Set the dough aside, covered, to rise for 1 hour, until it has doubled in size.

Flatten out the dough again and then shape it into a round loaf. This loaf is best proofed in a canvas-lined basket and then baked on a baking stone in the oven. It can also be placed on a parchment-lined baking sheet. Let the loaf rise for about 1 1/2 hours.

Glaze the loaf with the egg and milk mixture and bake it in a preheated 425°F oven for between 30 and 35 minutes. 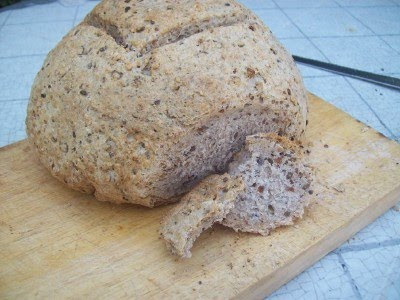 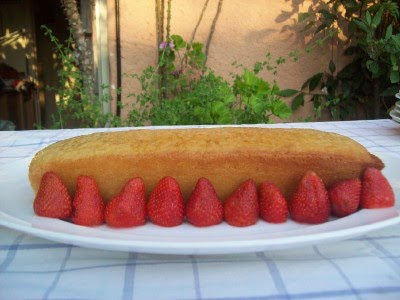 This was the week when it was Wendy of Pink Stripes 's turn to choose a recipe and she went for this simple yet delicious and easy to fancy up cake.
The crumb as Dorie states it's wonderful, I used dark rum and let it rest for two days well wrapped airtight and it was a hit with everyone.
I must apologize for being in late but I'm leaving for the holydays and not knowing wheather I'll have an oven on hands I baked and cooked like a crazy in the last two days also because I hosted some friends and family for both my inlaws birthdays yesterday evening.
I'll trust Blogger to post my next recipes on time sorry if I won't be able to visit you in this next month but I'll catch up in August !
Happy Holydays to you !
Posted by natalia at 12:44 PM 5 comments: