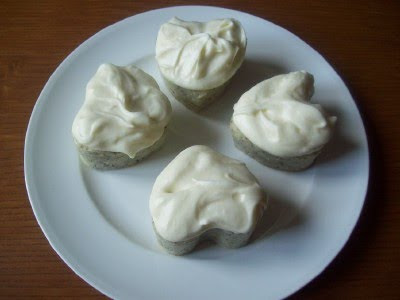 This Month the Cake slice group voted for this triple lemony cake... except I didn't want to eat it all and made cupcakes that are easier to carry around in my apartment building.
The cake is made with egg whites only and is quite pale but very moist and lovely in txture due to the tiny poppy seeds.
After baking the cake is soaked with a lemon syrup that gives it most of the lemon flavour.
I loved it but ate it without frosting just not to feel too guilty !
Please visit The cake Slice to see more real triple cakes .
Lemon Poppy Seed Cake with Almond Frosting
(Recipe from Sky High Irresistible Layer Cakes by Alisa Huntsman and Peter Wynne)
Lemon Poppy Seed Cake
360g plain flour
300g caster sugar (I only used 200g)
4½ tsp baking powder
½ tsp salt
3 tbsp poppy seeds
200g unsalted butter
1 large lemon, zest only
275ml buttermilk
5 egg whites
Poppy seeds or flaked almonds to decorate

Lemon Poppy Seed Cake
Heat the oven to 180C. Grease three 8 inch cake pans and line the bases with parchment paper. Combine the flour, sugar, baking powder, poppy seeds and salt in a mixing bowl. Mix gently to combine.
Add the butter, lemon zest and 200ml of buttermilk to the flour. Beat on low until completely mixed. Raise the speed to medium and beat for 1-2 minutes until lighter in colour.
In a medium bowl, combine the egg whites with the remaining 75ml buttermilk, whisk to blend thoroughly. Add the egg white mixture to the batter in 2-3 additions, scraping down the sides of the bowl and beating only enough to incorporate the mix. Divide the batter between the three pans.
Bake for 25 to 30 minutes until the cakes are golden brown, spring back when touched lightly in the centre, and a cake tester comes out clean. Leave to cool in the pans for 10 minutes before turning out. While the cake layers are cooling, make the lemon syrup.

Lemon Syrup
In a small pan combine the sugar, water and lemon juice. Bring to the boil, stirring to dissolve the sugar.
Generously brush the cakes with the lemon syrup while they are still warm. Then allow the cakes to cool completely before frosting.

Almond Cream Cheese Frosting
In a large mixing bowl beat the cream cheese and butter with an electric mixer until light and fluffy. Gradually add the icing sugar, about a quarter at a time, beating well between each addition. Add the almond extract and then continue to beat well for 3-4 minutes until light and fluffy.
To complete the cake, place one layer, top side down, on a cake plate and spread about a fifth of the frosting over the cake to cover evenly. Repeat with the second layer and place the third layer on top. Frost the top and sides of the cake with the remaining frosting. Garnish with your choice of flaked almonds or poppy seeds.
Makes 1 x 8inch triple layer cake. Serves 12-16
Posted by natalia at 5:39 PM 13 comments: