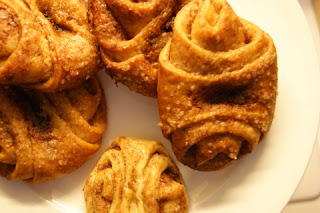 I'm  cooking this week for the first time with Tessa Kiros.
One of the things I love about IHCC particularly is the fact I get to know about cooks I'd never had heard of.
I bought 'Fallen Cloudberries' and I love the outlook of the book too.
This week is Potluck so I chose to bake these wonderful buns, the house smelled like IKEA...
Please visit the blog to see much more ! 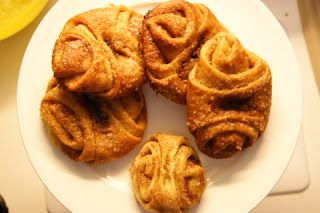 Makes about 35 buns.
Put the milk and sugar in a bowl and crumble in the yeast. Let stand for 10 minutes, or until the yeast begins to activate. Add the egg, butter, cardamom, and salt, and mix in. Add the flour, bit by bit, mixing it in with a wooden spoon until you need to use your hands, and then turn it out onto the work surface to knead. It may seem a little too sticky initially, but will become compact and beautifully soft after about 5 minutes. Put the dough back in the bowl, cover with a clean cloth and then a heavy towel or blanket, and leave in a warm place for about 2 hours, or until it has doubled in size.
To make the cinnamon butter, mix together the cinnamon and sugar. Divide the butter into four portions and set aside.
Put the dough on a floured work surface and divide it into four portions. Begin with one portion, covering the others with a cloth so they don’t dry out. Using a rolling pin, roll out a rectangle, roughly about 12 by 10 inches and 1/8 inch thick. Spread one portion of butter over the surface of the dough with a spatula or blunt knife. Sprinkle with about 3 teaspoons of the cinnamon mixture, covering the whole surface with quick shaking movements of your wrists. Roll up to make a long dough sausage. Set aside while you finish rolling out and buttering the rest of the dough, so that you can cut them all together.
Line two large baking sheets with parchment paper, or bake in two batches if you only have one sheet. Line up the dough sausages in front of you and cut them slightly on the diagonal, alternating up and down, so that the slices are fat V shapes, with the point of the V about 3/4 inch and the base about 2 inches. Turn them so they are all the right way up, sitting on their fatter bases. Press down on the top of each one with two fingers, until you think you will almost go through to your work surface. Along the sides you will see the cinnamon stripes oozing outward. Put the buns on the baking sheet, leaving space for them to puff and rise while they bake. Brush lightly with beaten egg and sprinkle a little sugar over the top. Let the buns rise for half an hour and preheat your oven to 350 degrees F. Bake them for about 20 minutes, or until they are golden. Check that they are lightly golden underneath as well before you take them out of the oven. Serve hot, warm, or at room temperature and, when they are cool, keep them in an airtight container so they don’t harden.
Posted by natalia at 9:06 PM 10 comments: