Paying it forward in more ways....(italiano a seguire)

Some days ago I partecipated a "contest" held by Shel on her blog Musings from the Fishbowl and I won ! The prize is an homemade tresure and the deal is that who receives it is willing to do the same.
I 'm always afraid that my writings are not so understandable so here is how Shel explained it:
"There are so many lovely giveaways in blogland, bloggers eagerly commenting and abuzz with the excitement of winning an unexpected gift, but that’s it. Someone wins, and then the generosity comes to a screeching halt and we go on with our lives. Nice, but lacking in momentum. This giveaway is a little different, however, because the “receivers” are also to become “givers”, if you will. In fact, that’s the most important rule of the game…
The rules are simple: I will send three people who leave a comment on this post a handmade gift within the next 365 days. I am willing to post anywhere in the world, so don’t let that stop you from commenting.
The catch is that you must have a blog and be willing to do the same thing….
The original rules stipulate that it’s to be the first three to leave comments are to win a little love, but I don’t so much like that because it makes it seem all “rush rush” and “hurry” and “let’s be in a race to be winners!”, and this isn’t about competition or running to beat anything or anyone so I'll randomly select three winners out of the ones who will answer to my post by December 6th at 23.59 Rome time and I'll announce the winners Dec. 7th. 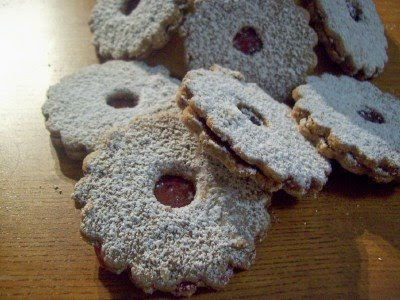 This week cookies again and what cookies ! The recipe was chosen by Noskos of Living the Life
It's such a good recipe ! As someone already mentioned the dough MUST be cold but the results are fantastic !! Check all the other's doing at Tuesdays with Dorie.